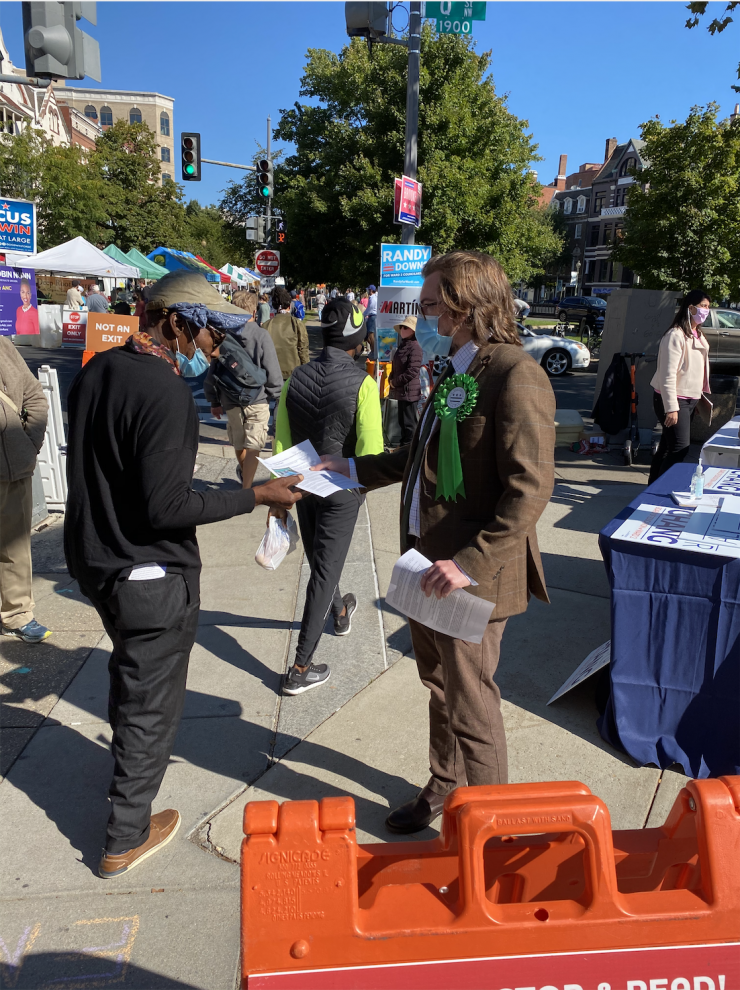 This is one of six council seats that will be up for election in November.

The seat in Ward 2 was vacant for five months after the resignation of longtime Democratic councilmember Jack Evans in January. Evans was on the verge of expulsion for an ethics scandal when he stepped down.

In June, political newcomer Brooke Pinto won both a crowded Democratic primary and a special election to fill the seat until the end of the year. The last candidate to join the primary race, Pinto fended off seven opponents, including Evans, ultimately winning with about 28% of the vote.

On Nov. 3, Pinto will face off in the general election against two former Democrats running as independents and a candidate from the D.C. affiliate of the Green Party. Republican nominee Katherine Venice withdrew from the race earlier this month, citing the need to vigorously oppose President Donald Trump’s presidency.

Here are the four contenders:

Pinto moved to the District from her home state of Connecticut in 2014 to attend law school at Georgetown University, after which she worked as an assistant D.C. attorney general. Her election this June broke two demographic barriers: she became the first woman to represent Ward 2 and, at 28, the youngest councilmember in D.C. history.

Pinto has the support of the Democratic Party establishment, including D.C. Attorney General Karl Racine. A Washington Post primary endorsement published in April said “she is steeped in reality and would hit the ground running with grit and smarts.” Opponents have suggested that she is not established enough in the District. An article in the Washington City Paper portrayed her as an outsider who “had no business winning the Ward 2 Democratic primary.”

Pinto is making the case that her experience as an attorney and councilmember demonstrates a proven track record. Her campaign touts her experience on the council, such as passing $50 million to fund public housing repairs.

Downs started his political career working in Democratic campaigns in his home state of Missouri and moved to the District in 2011 to work for the Sierra Club.

He is currently serving his second term as an elected advisory neighborhood commissioner for single member district 2B05, which includes parts of Dupont Circle, Logan Circle and Downtown. Downs’ campaign said he believes that voters’ values will outweigh party loyalty in this election.

Downs, who is openly gay, is a member of the LGBTQ Advisory Neighborhood Commissioners Rainbow Caucus. He recently co-sponsored an ANC resolution calling on the D.C. Council to ban the “gay panic” legal defense in court cases. His campaign pointed to the absence of LGBTQ representation on the council, saying that “this community needs a seat at the table.”

Veteran local journalist Tom Sherwood, resident analyst for the WAMU Politics Hour, said in an interview that incumbent Brooke Pinto “should not take Randy Downs lightly,” citing his active involvement on issues such as bike lanes and development battles.

“To me, the basic question in this race is, will Downs’ hyper-local experience overcome Pinto’s basic draw among Democrats?” Sherwood said.

Fernández has a background in biomedical anthropology and works at the American Association for the Advancement of Science. He is also an established local DJ who had a residency at the Eighteenth Street Lounge in Dupont Circle before it closed this summer.

Born in Lima, Peru, Fernández moved to D.C. with his family as a child, and he has emphasized his lifelong connection to the District. As he put it, “I’m from here, and Brooke Pinto isn’t.”

Fernández’s platform outlines a number of progressive policies to address social and economic inequities, including a 14-point plan to reform policing in the District that would reallocate funds from the Metropolitan Police Department’s budget to community services promoting mental health and violence prevention, among others. He said he is confident that his campaign poses a serious challenge to Pinto in the general election.

“This is not a protest campaign,” Fernández said.

Bolton, a journalist and first-time candidate, is originally from the United Kingdom and holds dual citizenship with the United States. A contributor to The Guardian newspaper and CounterPunch magazine, Bolton is offering what he calls “a radical alternative to the putrid status quo on offer from both of the mainstream parties.” His platform calls for major reforms of the electoral process, like banning corporate contributions and political action committees known as “super PACs” in city elections.

Bolton also proposes “aggressive tactics” to compel the federal government to grant D.C. statehood, a goal he wants to achieve within five years. Like Fernandez, he supports defunding police, “particularly redirecting money that is currently spent on police militarization to social services.”

Bolton has proposed to counteract the effects of gentrification by enacting citywide rent control and a permanent moratorium on evictions, and by lifting the property tax threshold to $500,000. He said that he is financing his campaign “on a complete shoestring budget.”

In the 46-year history of the D.C. council, voters in all eight wards have exclusively elected Democrats to represent them. Only in the citywide at-large races have Republicans, independents and third-party candidates ever won a seat.

In the Ward 4 Democratic primary election this summer, incumbent councilmember Brandon T. Todd, an ally of Mayor Muriel E. Bowser, lost his reelection bid to Janeese Lewis George, a democratic socialist. What remains to be seen in Ward 2 is whether a progressive insurgent can pull off a similar coup in November’s general election.  At stake is the question of authenticity: will Ward 2 voters prefer a newer candidate from the politically dominant party, or will they look to an outsider with deeper local roots?