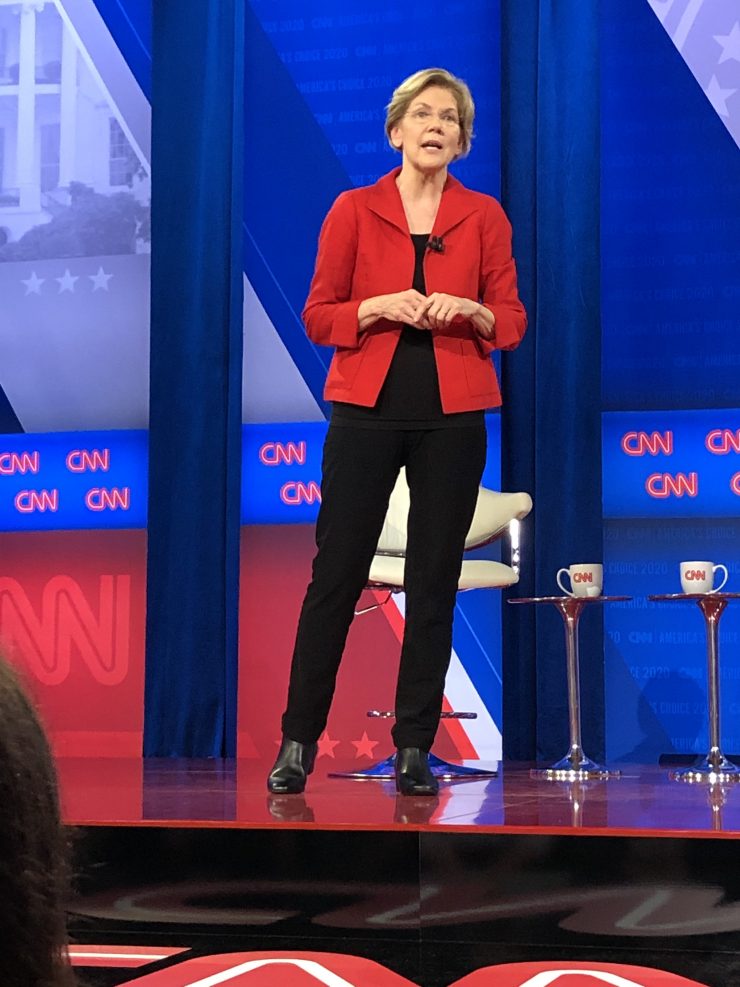 “The first thing I would do would be to enforce the current laws about gun dealers,” Warren said Wednesday at a town hall here. “We have let so many loopholes slip through.”

Sen. Amy Klobuchar also spoke about gun violence at the CNN-sponsored event when consultant Donna Norvelle, who said she had been a victim of domestic gun violence, asked how Klobuchar would ensure that only mentally healthy citizens are able to access guns.

“In a number of states, if you are convicted of serious domestic abuse … you can go out and actually still get a gun. And yet, there’s a huge correlation between domestic abuse convictions and later homicides,” Klobuchar said, adding that the first thing she would do as president is to require universal background checks.

The Minnesota lawmaker also said she planned to eliminate the “boyfriend loophole,” which refers to a gap in American gun legislation that allows physically abusive ex-boyfriends and convicted stalkers to buy guns.

Neither Klobuchar nor Warren was expected to win the “first-in-the-South” primary Saturday, but the hundreds of people attending the town hall appeared enthusiastic about all the candidates.

Former Vice President Joe Biden and former New York Mayor Mike Bloomberg also spoke, with many of those attending saying that Biden had an air of confidence that had been missing in recent weeks. Rep. Jim Clyburn, known as “the kingmaker,” threw his powerful support to Biden Wednesday morning.

Bloomberg, meanwhile, is not on the South Carolina ballot.

Town halls are designed to give voters direct access to candidates by allowing them to ask specific questions. Many of those who asked questions at the CNN event said they were still undecided.

Several people, including Tammi Green, said they were concerned about the effect student loan debt was having on their lives. Green, a Charleston County public defender, said she had more student debt today than 10 years ago, even after declaring Chapter 13 bankruptcy in 2012.

“I actually owe more today than I did the day I graduated from law school. The interest is killing me,” Green said.

Chris Middleton, a construction consultant and Navy veteran, asked how Warren planned to relieve struggling graduates from their debt, wondering if he would be saddled with the cost of such a measure.

“Unless you have more than $50 million in assets, I’m not asking you to pay for anything,” the Massachusetts senator said. “But I do think the top one-tenth of 1 percent can afford to pay a little bit more.”

Warren and Klobuchar said they had no plans to drop out of the race, with each confident she would win her home state.

“As as long as they want me to stay in this race, I’m staying in this race,” Warren said, adding that she had made a lot of “pinky promises” to her constituents. “I’ve told little girls we persist,” she said.