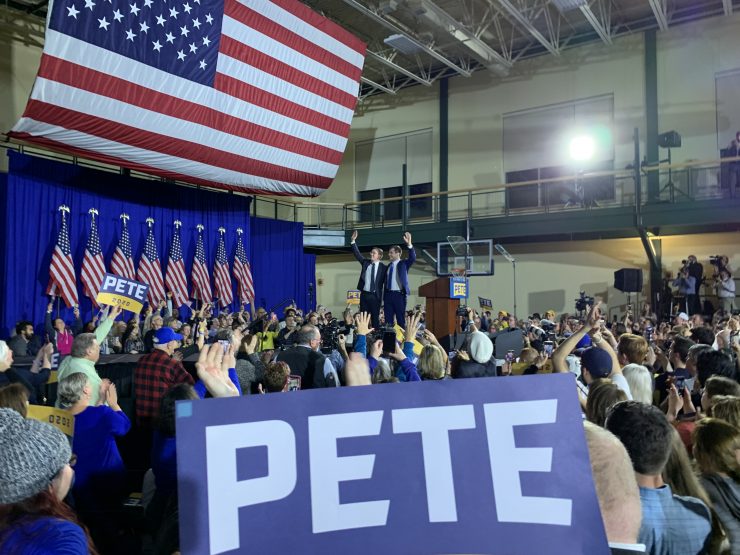 ‘We’re on the same team. We just support different players.’

PORTSMOUTH, N.H. — “This is the first time I’ve ever done this!” The energy radiating from 61-year-old Carol Andre was palpable. The retired special-education teacher had arrived at a Portsmouth polling station around 8 a.m. in order to stump for her candidate: Pete Buttigieg.

“I got hooked on this guy in the summer and he impressed me so much and still does that,” Andre said. “So here I am out in the freezing cold and rain, holding a sign for him.”

Andre wasn’t the only supporter to brave the weather to support a candidate. Lisa Bellanti, a 49-year-old attorney, who had just decided the previous night to support Sen. Amy Klobuchar, arrived at the same polling station, a few minutes after Andre.

“I’m taking time off of work, and I’m fortunate to be able to do that,” Bellanti said.  “I love Amy because she’s tough, and I love tough women.”

While standing in the rain and wind, the two women discovered, despite their visible passion for each of their chosen candidates, that they had more in common than they thought.

“I love Pete, too, though, and that’s one of the reasons Carol and I are talking, aside from that we just found out we are essentially neighbors, our neighborhoods border each other,” Bellanti said. “Either one of our candidates could be the one,” she added. “And I would characterize it as: “We’re on the same team. We just support different players.”

Andre expressed a similar sentiment. “I kind of was on the fence with Amy and Pete for a long time,” she said.of the two candidates considered moderate contenders in the challenge to President Donald Trump “I just got hooked on him. He’s the antithesis of what we have.”

Andre is certain of just what drew her to Buttigieg: “He represents, and is passionate about, the things that are most important to me. If I had to pick the top three, it would be climate, education and health care.”

Bellanti was quick to cite a specific moment that made her take interest in Klobuchar. “I liked that in one of the first New Hampshire town halls, Amy was asked, “Do you support free college for everyone?” and her answer was a simple and straight “no” because I don’t either. I support affordable college for everyone.”

The most striking aspect of the interaction between the two women was just how similar their views were.

“What I like about both of them,” said Bellanti, “is I need a first man in the White House.”

“I really do, too, and either candidate, that’s going to happen,” Bellanti said.

Both women also seemed to share a passion for defeating Trump.

“I think if either one of our candidates wins, he might not show up to a debate,” suggested Bellanti, “because I think he’s afraid to debate. He’d love to debate Bernie Sanders, Joe Biden and Elizabeth Warren.”

“And he would be all over them and in a really nasty way,” added Andre.

“I see him not being able to hold his own with either Amy or Pete. I think they’d chew him up.” Andre predicted.

“The fact that we don’t support the same candidate doesn’t matter to either of us,” Bellanti said, “because we both have the same values. I heard you talking about education and climate, and that’s really important to both of us!”ss

She added, “And we’re neighbors!”