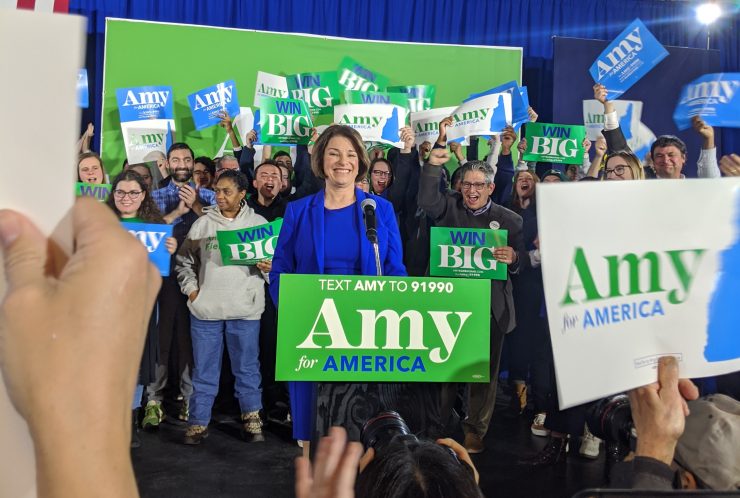 NASHUA, New Hampshire —  More than 1,000 New Hampshire voters and political tourists waited outside Fair Grounds Middle School to see what many are calling the “KlobuSURGE.”

Standing in front of her largest crowd of the primary Klobuchar weaved her personal stories with predicted policies of a Kloubchar White House.

With almost half of the audience still undecided, Klobuchar made a play for independent voters.

“The heart of America is much bigger than the heart of the man in the White House, Klobuchar said. “We’ll restore that sacred trust between the president and the people of this country.”

After receiving only one delegate and 12.3 percent of the vote in Iowa, Klobuchar has seen a much needed “mini-surge” and her campaign announced it raised $3 million after her strong reviews from the debate in New Hampshire on Friday.

Among the crowd was a teacher from New Jersey. She wore a Moms Demand Action shirt and said, “it’s important for me to come up here and here the candidates because I don’t get a chance to see them all like this in New Jersey.”

Two new polls show Klobuchar has moved up to third-place in New Hampshire. The Emerson College and Suffolk University polls have found the Minnesota senator to be in third place, putting her ahead of both Joe Biden and Elizabeth Warren.