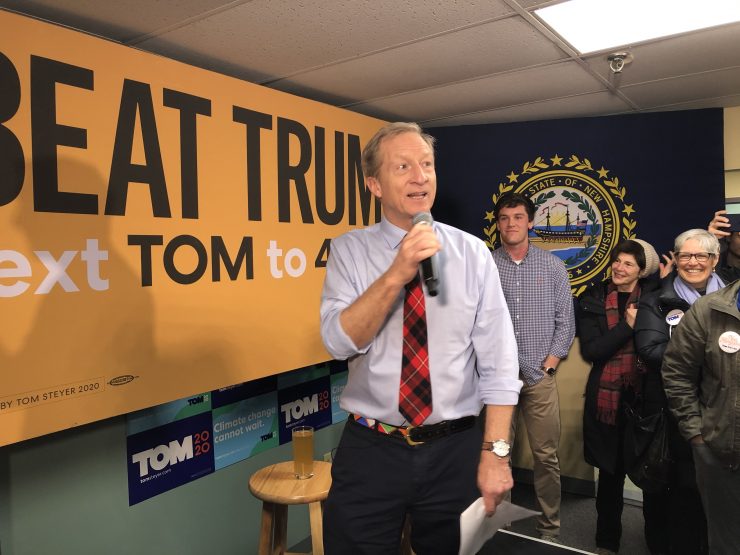 Underdog Steyer says he’s the one to beat Trump

The billionaire cites climate change as the top issue.

MANCHESTER, N.H. — Throughout the weekend, billionaire Tom Steyer again proclaimed himself to be the candidate that can defeat Donald Trump. His small New Hampshire campaign headquarters was packed with about 75 people for an event Saturday, but it sounded more like 500.

Supporters in the crowd said Steyer is the one candidate who can win the election for the Democratic Party in November. Behind the stage was a huge “Beat Trump” sign in letters larger than the candidate’s name.

Democrats mostly agree that this election matters less about any specific policy than defeating Donald Trump in November. So many of the conversations that voters have here are about electability and saving democracy instead of which healthcare plan is perfect.

Steyer’s older brother, Jim, put it bluntly. In his speech before Tom came out, he twice said, “Tom will beat Donald Trump.”

Jim Steyer’s simple statement sums up the purpose of his sibling’s campaign. Tom, like all the Democrats, has a plan to increase health care coverage, combat climate change and fight for an economy that helps the working class. However, his unique entrance into politics and his rhetoric throughout debates make his intentions clear.

Steyer entered the political realm through creating the Need to Impeach movement in the fall of 2017 after rumblings of Russia’s interference in the 2016 election began to have more ties to Trump.

The movement had millions of petition signatures to impeach the president because of his ties to Russian interference, and eventually with the quid-quo-pro situation regarding Ukraine. In addition to creating awareness to Trump’s alleged abuse of power, Need to Impeach helped to elect Democrats in the 2018 midterm, and culminated in Steyer’s decision to run for president.

Although the Need to Impeach movement has come to a halt with Trump’s acquittal, Steyer has become a more attractive candidate by the day.

In Friday’s debate in New Hampshire, Steyer took charge as the leading candidate on climate change and racial justice. More importantly, he consistently remarked on his ability to unseat the current president.

During the debate and Saturday’s rally, he repeated, “We need to kick his ass on the economy, and I can do that.” Unlike President Trump, whom Steyer says “Hates 80% of Americans,” Steyer said he knows the needs of the working class.

He sold his business to get into social and climate activism. He plans to create over 4 million jobs that are environmentally sustainable and accessible to the working class. He also plans to give a 10% tax cut to everyone who makes under $250,000 a year, increasing taxes on the rich.

Steyer’s economic plans are key for defeating Trump, but his primary issue is climate change.

Steyer is the only candidate in the field who does not fly privately. His principle on climate change guides his traveling decisions. Even though he gets caught on long layovers, the damage to the environment by flying privately is much more significant to Steyer than losing a couple of hours. It’s no wonder his brother Jim, also described Tom by saying, “He is who he is.”

Climate is not the only situation where he is a genuine, principled man. Every Sunday, you can find Steyer at an Episcopalian service. Attending religious services takes precedence over appearances on Sunday-morning media opportunities. His Episcopalian faith, in addition to guiding his Sunday routine, is the roots for his activism, he said. He cares about social and environmental justice because his faith leads him there.

One supporter at the campaign event, Maureen Dadekian, sees Steyer as the best candidate for the general election. She has watched all the debates and New Hampshire town halls on television and has read political news regularly.

“He’s very wise and very genuinely invested,” she said. “He’s done the work and demonstrated for 10 years, not just a couple of months.”