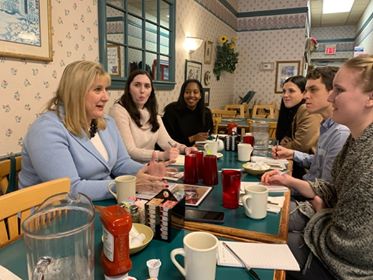 ‘I was really born a Democrat’

State senate president reflects on leaders in the trailblazing state.

MANCHESTER, N.H. — New Hampshire Senate President Donna Soucy knows politics. To her, using public service to do good is a family business that she has been working on most of her life. Her career in elected office stretches back over 30 years, from becoming the first female chair of the Manchester Fire Commission to her current role as the lead Democratic standard bearer against Republican Gov. Chris Sununu.

She’s been on the frontlines of politics in the Granite State since a young age, having watched both of her Democratic parents work as legislators and activists in a heavily Republican environment.

“I was really born a Democrat,” she said, noting that she and her father made history as the first parent-child team to serve as aldermen in Manchester.

Her current job as the fourth female Senate president in the history of the state reflects both how prominent women have been in the leadership of the state and how the former red New England stronghold has slowly and surely become purple.

In the wake of the chaos caused by the Iowa caucus, the heavily white, early primary states have come under increased scrutiny. In the face of criticism, Soucy is adamant about the positive role the Granite State plays, the integrity of their voting system and the civic responsibility residents of the state take upon themselves.

She acknowledged the demographic makeup of the state doesn’t reflect the rest of the country, but as an example of the state’s benefits, she pointed toward the 2016 primary and the opioid crisis.

“Hillary Clinton, Bernie Sanders, Martin O’Malley, to an extent, really picked up on [the opioid crisis] and suddenly made it part of their national policy” because of feedback they heard from New Hampshire residents, Soucy said.

The state boasts one of the highest voter turnouts in the country, with 72.5% of eligible residents making their way to the ballot box in the 2016 cycle. Their unique participation has provided mixed results for Democrats — in the 2018 midterm election New Hampshire voters decided to reelect the sitting Republican governor but handed control of the legislature over to Democrats.

That’s because of their uniquely pragmatic nature, favoring socially libertarian positions combined with fiscally conservative views on spending. In terms of the primary, Soucy sees that playing in favor of the moderate Democrats over the progressive alternatives of Sen. Elizabeth Warren and Sen. Bernie Sanders. In the past, turnout has helped build a gender balance in politics unseen in most of the rest of the country.

New Hampshire holds a unique position for having a remarkably high number of women in elected office. The state Senate was the first legislative body in the country to be majority female and has paved the way for female legislators with female-friendly accommodations in the legislative building, like lactation pods.

Soucy credits the long line of trailblazing New Hampshire women for helping her get there.

“Jeanne Shaheen certainly being the first who comes to mind in the first moment in the history of our country to serve as both a governor and the United States Senator,” she said. “But she certainly has been a role model and she certainly has encouraged other women to step up and to show that they can engage and be part of the process and that’s made a big difference.”

She also worked heavily in expanding reproductive rights for Americans even as they come under fire in state legislatures across the country. New Hampshire does not have trigger laws in place in case Roe v. Wade is overturned, but the senator has helped strengthen abortion protections and is looking ahead for more ways to help in the future.

She also pointed to the high concentration of women leaders and socially liberal voters helping build a bipartisan consensus around protecting abortion in the Granite State.

With a high number of women elected in office in the state also comes confidence in their ability to win the national election. “The people that I speak with that are most concerned about electability, it tends to be more along ideological” issues rather than gender ones, says Soucy.

Soucy was confident that the ideological faults would not stop the local party’s chances in 2020. She noted that despite poor fundraising in 2018, the Democratic challenger Molly Kelly still came close to unseating the Republican incumbent. With the energy across the state increasing this cycle, she is confident that Democrats will manage to sweep the state come November.