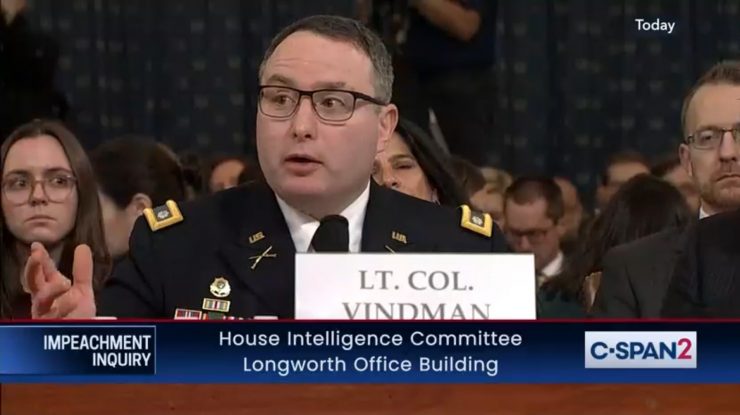 Tuesday testimony: Vindman, for the record

As Congress enters the second full week of impeachment hearings, two officials who were privy to the Ukraine call are the first to testify.

In the first of five hearings for the second full week of impeachment hearings, Lt. Col. Alexander Vindman and Russia adviser for the vice president’s office, Jennifer Williams, kicked off testimony.

The two White House officials were the first witnesses to appear publicly before Congress who were privy to President Donald Trump’s July 25 phone call with Ukrainian President Volodymyr Zelensky. Trump asked the Ukranian president to investigate Hunter Biden, the son political rival Joe Biden, according to a rough transcript of the call.

Who were the witnesses?

Vindman is director for European Affairs, and the top Ukraine expert, at the United States National Security Council. He testified that he helped draft talking points to guide the phone call between Trump and the Ukranian president.

Jennifer Williams is a Russia adviser working in the office of Vice President Mike Pence.

Vindman’s testimony was highly anticipated because of his involvement in the call and close work with Ukraine as a staffer in the United States National Security Council.

Vindman’s deposition prompted tweets by President Trump weeks before his official hearing. The president referred to Vindman as a “Never Trumper,” suggesting that he was aligned against the president before he was elected.

The White House has also distributed talking points to surrogates questioning Vindman’s credibility and suggesting the career official was upset that the president didn’t stick to talking points, according to a report in the Daily Beast. During the public hearing, the White House tweeted a quote from a former supervisor of Vindman that was critical of the lieutenant colonel, and questioned his judgement.

According to Vindman, Trump veered from the prepared talking points and instead asked the Ukranian president to look into former Vice President Joe Biden and his son Hunter Biden, who sat on the board of a Ukranian oil and gas company.

Much of the speculation in the lead-up to the day’s testimony was how Vindman and Williams would characterize the call.

Williams testified that she found the conversation between Zelensky, and Trump “unusual.” She said she did not discuss her concerns with anyone else.

Vindman, on the other hand, immediately reported the call to the National Security Council lawyer. Vindman described the call as “concerning” and “inappropriate,” during his opening statement.

The rough transcript of the call shows Trump asking Zelensky for “a favor” and then, requesting he have Ukranian officials look into Joe Biden and his son.

Vindman said that the “favor” of Zelensky was more of a demand.

Vindman explained, as he understood the “power disparity” between Trump and Zelensky, he compared the dynamic to an order in a military chain of command.

Because of this, Vindman saw the interaction as one that left little option for denial on Zelensky’s part.

Vindman downplayed the importance of a missing word from the rough transcript, however. Democratic lawmakers on the intelligence committee raised questions about the omission of “Burisma,” the name of the Ukranian company where Hunter Biden served on the board from the transcript released by the White House.

Both Vindman and Williams testified that Trump explicitly mentioned Burisma, but Vindman said that he did not believe this omission was “nefarious” and instead may have been used to shield sensitive content.

Vindman said that Zelensky demonstrated a familiarity with Burisma, and that it was possible the Ukranian president had been prepared on the issue before the call with Trump.

“In the context of a call that was on their broader bilateral relationship, seemed to me that [Zelensky] was either tracking this issue because it was in the press, or he was otherwise prepped,” Vindman said.

Does Vindman know the whistleblower?

Leading lawmaker on the intelligence committee clashed over questions about which colleagues Vindman had spoken to about the call. Committee chair Adam Schiff, D-Calif. shut down the line of questioning, saying that it could reveal the identity of the anonymous whistleblower, who initially alerted Congress to the Ukraine phone call.

Rep. David Nunes, R-Calif., and Rep. Jim Jordan, R-Ohio, asked Vindman if he would provide details about the colleagues he may have discussed the call with. When Vindman’s lawyer interjected and told his client not to respond because it could reveal the identity of the whistleblower, Republican lawmakers questioned how the lawyer would know this without knowing the whistleblower’s identity.

Despite this, both Vindman and Schiff maintained they did not know the whistleblower.

Vindman, who came with his family to the United States from Russia when he was a child, speaks both Russian and Ukrainian in addition to English.

Both the languages he spoke, and a position he was offered by Ukraine, were the focus of GOP counsel, Steve Castor.

Castor referred to a comment by a Ukrainian official that Vindman was offered a position as the minister of defense for Ukraine.

Vindman responded saying he found the question that the offer was real “comical,” because of his rank in the military, which he thought was not high enough to warrant a legitimate offer.

Castor maintained, this close relationship with Ukrainian officials calls into question the loyalty of Vindman.

“I’m an American, I came here when I was a toddler, and I immediately dismissed these offers,” Vindman said.

Rep. Mike Turner (R-Ohio) brought to attention Vindman’s rank, asking if he had ever spoken to Trump directly, Vindman answered no.