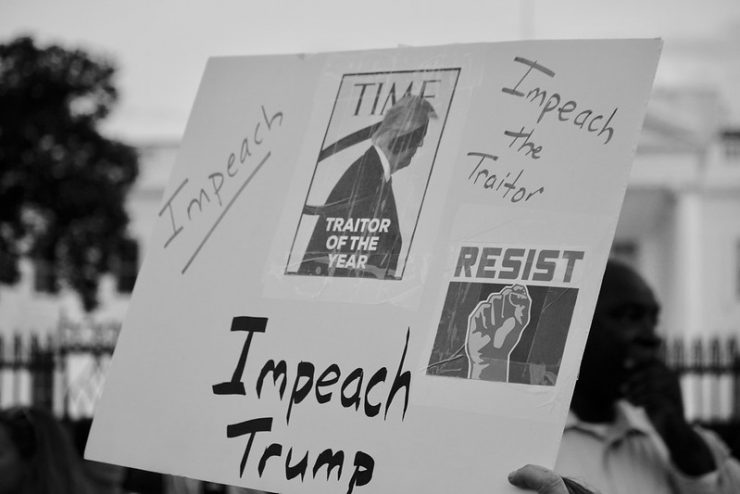 Immigration lawyers and advocates say the impeachment hearings raise uncomfortable issues about treatment of immigrants sitting at the witness table.

Lawyers, advocates and immigrants view some of the reaction to the impeachment hearings as a broad reflection of what they see as Trump’s immigration ideology.

So far, three witnesses testifying before the House Intelligence Committee hearings are immigrants.

Marie Yovanovitch, who was born in Canada, is a daughter of immigrants fleeing the Soviet Union, Lt. Col. Alex Vindman was brought to the U.S. by his father who fled a Soviet-controlled Ukraine and Fiona Hill’s coal miner father brought her from Northern England for better economic opportunities.

Most of the attention has been on Vindman and Yovanovitch. Immigration advocates have noticed.

All three witnesses earned Ivy League degrees and held positions in service to the U.S. Vindman and Yovanovitch faced the same “duality” accusations by the Trump administration that other immigrants go through as well, said former Maryland State Delegate Maricé Morales, now an immigration lawyer.

Conservative media have been critical of Vindman. Fox & Friends host Brian Kilmeade said that Vindman “tends to feel sympatico with the Ukraine,” according to Newsweek. Trump also attacked Yovanovitch, prompting the Democrats to push back with claims of “witness intimidation.”

The “treatment of Vindman” represents the “irony of Trump’s relationship with immigration,” Morales said. She explained how the “blatant anti-immigrant sentiment” of questioning Ukranian-born Vindman’s loyalty to the U.S. symbolizes “Trump’s disloyalty to the American people.”

Vindman showed up in his military uniform this week to show his collection of awards and his “high- ranking positions in U.S. service,” Morales said. But “Republican congressmen questioned his loyalty simply because he’s an immigrant.”

In the hearing GOP legal counsel raised the issue of Vindman being offered a high-ranking position in the Ukrainian government; Vindman said it was “comical.”

Morales, who is also the youngest Latina to serve at the state level in the country, said although immigration policies aren’t at the heart of the impeachment hearings, the Ukraine scandal is suitable because it’s most accessible to the public.

Morales said she has officially endorsed Elizabeth Warren and highlighted the importance of voting when it comes to new leadership.

Rivlin, who serves as the director of communications at America’s Voice, an immigration advocacy organization, said what lies in the “heart of the Ukraine scandal” is “Trump’s decisions based on his own self interest which also explains a lot of Trump’s immigration policies.”

An October 2019 Gallup poll reports that 34% of the American public consider “dissatisfaction with the government and poor leadership” as the most important problem facing the country.

The same poll reports 13% consider immigration as the most important problem. The two mentioned categories are the highest on the list of options that include racism and poverty as choices.

“That’s why I think Congress is correct in pursuing the Ukraine case,” he said. “Even though there are any number of other policies that are outside the law, are screaming for more congressional oversight, and need strong pushback in the courts.”

When asked if her field has seen drastic change with the Trump administration, immigration lawyer Eileen Blessinger said immigration policies under Trump have made her clients’ lives more difficult than before.

“It will take years upon years to undo this,” Blessinger said of circuit and appellate courts dismissing the authority of immigration courts, a legal phenomenon she said Trump empowered.

To solidify their clients’ cases, immigration lawyers seek psychological verification for trauma. Gabriela Romo, a psychologist with a specialty in dealing with a range of immigrants, said “I have more clients since Trump.”

When it comes to impeachment and immigration related news cycles, “the fear and anxiety of being deported” by Trump is a recurring theme she said.

Romo said “watching the news is a trigger that reminds traumatized immigrants about the abandonment and the risk of danger” they constantly face.

Impeach Thanksgiving? A guide to dodge impeachment arguments with family and friends