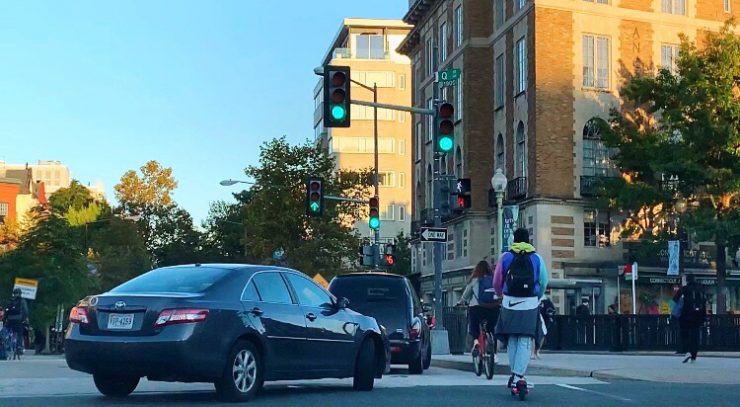 150 pedestrians and motorists were stopped and warned during traffic safety push.

A scooter, a single shoe, and a pair of headphones: that was the painted picture that flooded the news to describe the scene of D.C.’s first scooter fatality.

Carlos Sanchez-Martin was 20 years young when he was struck by a SUV while riding an electric scooter around Dupont Circle. Firefighters rushed to free Martin who was pinned underneath the vehicle, but he later died at the hospital that same morning.

A year to the date of the fatal accident, eight officers from the Metropolitan Police Department stood at the circle monitoring traffic in Martin’s honor.

Deputy Director of MPD, Kristen Metzger, told the Wash that in only two hours of enforcement, officers stopped and warned 150 pedestrians and motorists for either crossing the circle illegally or making illegal turns. Those are the actions that caused Martin’s death. In addition, MPD made their presence known by handing out a total of 16 citations.

This is the kind of monitoring that Kailee Blackard said needs to be done everyday. A new resident to the D.C. area who comes from driving in a more suburban area, said that the traffic circle gives her extreme anxiety.

“It’s so big, even before merging on I already feel myself starting to really grip the wheel with both hands. I don’t know if it’s just because I’m still a little new but it’s straight confusing. Plus, no one seems to know how to throw on their turning signal,” she said.

According to Blackard, you always have to be alert. She juggles trying to pay attention to her GPS for her exit, jaywalkers, and the aggressive drivers that surround her who are not afraid to honk if she hesitates even a second too long.

“Nothing’s going to solve this problem completely, you know? We’re trying to put 10-thousand potatoes in a five-pound sack here,” he said.

As a native who has lived in the neighborhood since 1981, Silverstein revealed that there hasn’t been much change to the circle since 1948.

Friday evenings are a standstill at Dupont Circle. It merges main arteries Massachusetts Avenue with four other streets. Congested with cars and impatient pedestrians who hop between the mazes of islands within the circle before they’re supposed to, bikes and scooters add to the confusion. Part of the issue is because Dupont Circle is located within D.C.’s Central Business District. Inside that boundary, people riding on two wheels are not allowed on the sidewalks. Instead, they must share the road with vehicles.

“You just don’t have enough room for all the traffic that’s going there,” Silverstein said.

Divided into two parts, the Commissioner said that people tend to feel trapped in what he calls a gridlock type of situation when they find themselves stuck in the inner ring of the circle, realizing they should be in the outer. He knows that the necessary alleviation could come from a redesign. But, this may never happen since the circle is a national park. Therefore he is unsure how D.C. would be able to expropriate it.

According to MPD’s Traffic Fatality Trend, there were 19 fatalities citywide in 2012. Since then, the number climbed up to 36 fatalities occurring last year.

Silverstein told The Wash, Dupont Circle does have a dedicated Traffic Enforcement Officer, but the ward shares him with another busy intersection. He thinks safety would be improved if more enforcement were added.