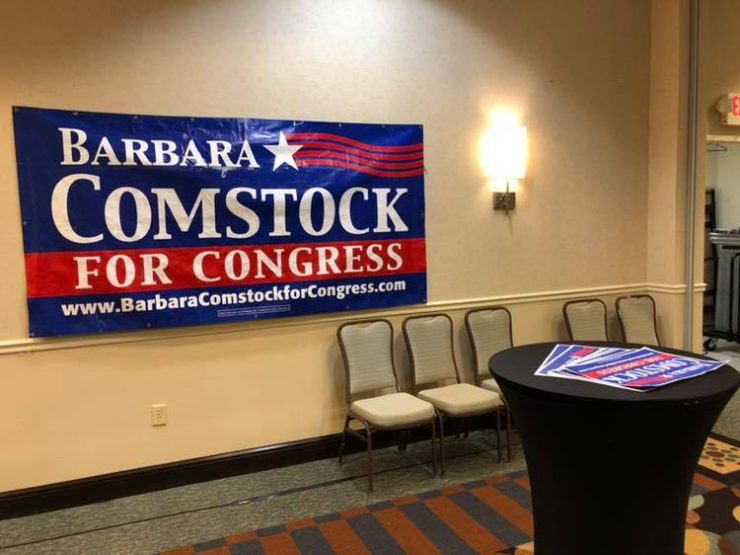 Comstock was seeking her third term in the House. In unofficial results, Wexton won with 56 percent of the vote, while Comstock earned 43. 8 percent.

During her concession speech in Ashburn following the election results, Comstock said her work will continue.

Comstock said successes like the Republicans’ doubled child tax credit will continue to serve communities. The child tax credit is a part of the Tax Cuts and Jobs Act passed in December 2017, which Comstock supported and said is the reason the economy is booming.

“Our common sense conservative values we will continue to fight for,” she said. “And we’ll continue to get all of these great successes for years to come.”

Celia Meyer, a 28-year-old Ashburn resident, said the economy is the reason why she voted for Comstock because she feels it has been doing “extremely well since the tax bill.”

“Due to the tax bill, now, next year we’ll be able to qualify for it” (the child tax credit), Meyer said. “I’m extremely happy about that, and I just want to see the economy keep growing.”

Meyer said the results in the 10th District had less to do with Comstock and more to do with President Donald Trump and his personality.

“It’s a referendum on Donald Trump,” Meyer said. “No one in this area likes him.”

Meyer said she feels Comstock has proven herself from a policy standpoint, and her opponent Wexton has done nothing in the Virginia state senate.

Bill Wilkin, 67, a high school history teacher in Ashburn, said he is a strong supporter who admires Comstock. Wilkin said he feels Trump’s shadow is “clearly” why Comstock lost. He said Comstock has consistently spoken against Trump’s offensive tweets and executive orders.

Wilkin said he is originally from upstate New York and was previously a Democrat. He said Comstock’s loss is not a victory for Democrats.

“The Democrats, I think, are going to regret the way they picked up whatever seats they pick up tonight,” Wilkin said. “Wexton’s not ready for prime time.”

Christine Hackett, 57, works part-time doing business development for an engineering firm. Hackett said she is a registered Democrat but voted for Comstock because she represented the district the best during her two terms.

Hackett said after Trump was elected in 2016, she started to listen more to people who said the Democratic Party was not helping them economically.

“I started paying attention a lot more and came to believe that Barbara Comstock was working for the whole district, not just Republicans,” Hackett said. “She works for everybody.”

Hackett also said the results were not because of Comstock’s views on issues and policies.

“Trump has a lot of detractors,” Hackett said. “She was unfortunately painted with that brush, and I just hope she doesn’t get discouraged and wants to stay involved in public service.”