The day after a September rainstorm, objects that don’t belong are strewn across Rock Creek Park, the largest green space in Washington, D.C.

“Rock Creek is seen by me and kind of a lot of folks, and maybe everyone, as kind of a green oasis where nature is the dominant element,”  said Scott Einberger, a historian who studies the area. “Yet, you aren’t allowed to stick your feet or wade or swim in the water, because it’s polluted.”

Rock Creek failed the Environmental Protection Agency’s water quality test in 2012 because it contained a large amount of bacteria, mercury, metal and other toxic pollutants, according to the EPA’s Water Quality Assessment report. The poor water quality kills fish living in the water, said Melanie Choukas-Bradley, a Chevy Chase writer who spent a year studying the park.

Advocates blame population density, the area’s sewage system and heavy rainfall caused by climate change. They say initiatives to redirect rainwater and teach residents about the creek will help repair a park once beloved by President Theodore Roosevelt.

“Water connects us all,” said Diane Lill, director of education for the Audubon Naturalist Society, a Washington conservation group. “There’s just so much value in connecting people and getting them to pay attention to what’s happening with the water in their own neighborhood.”

“Pollution may occur during rainfall.” That’s the warning posted next to the creek in Rock Creek Park along Piney Branch Parkway in the District.

Pollution in Rock Creek wasn’t always common. In the early 20th century, most rainwater in the Washington region filtered into the ground naturally, Einberger said. That changed when the population swelled in the mid-20th century.

Sidewalks, parking lots and rooftops are impervious, meaning water can’t easily filter through them, Einberger said. The percentage of impervious surfaces inside the Beltway increased from 22 percent in 1984 to 26 percent in 2010, Xiao-Peng Song, University of Maryland scientist who published a study on the topic in 2016, said in a NASA report.

In heavy thunderstorms, water hits concrete across the District and flows into storm drains. Along the way, it picks up pollutants, like trash or oil. Some of the water eventually flows into Rock Creek, dirtying the watershed, Einberger said.

The District’s underground water tunnel system doesn’t help. Parts of the system simultaneously handle stormwater and sewage, which is what you flush or rinse at home, said Pamela Mooring, spokesperson for the District of Columbia Water and Sewer Authority, known as DC Water.

In a thunderstorm, the tunnels aren’t large enough to carry both regular sewage and extra rainwater. This forces the system to pump a dirty mixture of the two, called combined sewage overflow, into Rock Creek and other rivers in the region. That kills fish living there and hurts the birds that feed on them, Choukas-Bradley said.

“Just like with us, without oxygen, the aquatic species, fish, can’t survive,” Einberger said.

Heavy rainfall caused by climate change isn’t helping, Einberger said. Choukas-Bradley spent 2007 studying Rock Creek Park for her book. She said extra rain, like what the region saw in September 2018, floods the creek. This can erode the banks and uproot trees, she said.

“I’ve really seen a change in how potent the storms are and how you can just get incredible rainfall all of the sudden,” Choukas-Bradley said.

How residents can help

Residents can participate in programs in Montgomery County and the District, both home to parts of Rock Creek Park, to improve the watershed’s water quality.

In Montgomery County, environmental advocates are developing a chemistry curriculum to teach high schoolers about the watershed. They hope it will motivate them to preserve the park, Lill, one of the program’s architects, said.

Students will study the nitrogen cycle, sample precipitation and test water runoff in different locations near their school, Lill said. The program will be funded by a million-dollar grant from the National Park Foundation.

“Taking these students outside and showing them that there are living creatures under the rocks in the stream that depend on clean water kind of opens their eyes to this whole new world of nature that’s right there in their own neighborhood,” Lill said.

In the District, DC Water has the Clean Rivers Project, an initiative launched in the early 2000s to keep pollution out of rivers. The project will expand the city’s tunnel system, lowering the amount of sewage dumped into rivers, and add plants, soil and natural items to the city to soak up stormwater, said John Lisle, spokesperson for DC Water.

Residents can help through the District’s RiverSmart Homes program. The program offers subsidies for homeowners to plant trees, install rain barrels, plant gardens or implement other techniques to naturally filter rainwater, according to their website. Montgomery County has a similar program called RainScapes.

“It is such a treasure for our city to have this forested stream valley running right down the middle of the city,” Choukas-Bradley said. “When it’s threatened by stormwater runoff, there are all kinds of consequences.” 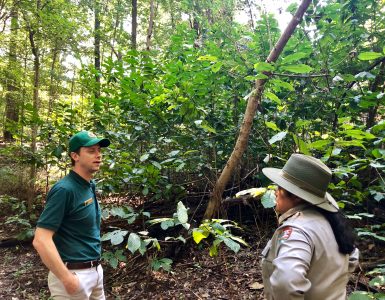